Vancouver, British Columbia: August 19th 2013 East West Petroleum Corp. (TSX-V: EW, the “Company” or “East West”) is pleased to announce that drilling operations have commenced on the first well in its nine well 2013 exploration program in the Taranaki Basin of New Zealand.

The Company’s joint venture partner and operator, TAG Oil Ltd (“TAG”), has commenced drilling operations at the Cheal E-1 well on the Cheal North permit with the Nova-1 rig. Drilling is expected to take up to four weeks to reach a total depth of approximately 2,500 m, following which the rig will stay on site to drill a further four wells testing independent prospects on Cheal North. The wells will be targeting the Miocene aged Mt. Messenger and Urenui formations which have shown to be productive across the Taranaki Basin and on TAG’s adjacent Cheal field.

Greg Renwick, CEO of East West Petroleum commented, “The Board and management of the Company are extremely pleased to have commenced this major exploration drilling program in New Zealand. This area of the Taranaki Basin is a proven petroleum province and numerous prospective areas have been identified for future drilling.”

David Sidoo, Chairman of East West added, “The work program developed by the joint venture is very aggressive and was designed to test the many prospects we hold. We are looking forward to the results of these first wells and continuing to develop our prospects and opportunities in New Zealand with TAG.”

Drilling of three wells on South Cheal and one well on Southern Cross is scheduled for Q4 of this year. The total net cost to East West of the 2013 New Zealand drilling program is estimated at C$12.4 million and is fully funded out of East West’s existing cash balance of approximately C$22.5 million. Summaries of the 2013 New Zealand work program and prospective resources being targeted are provided below: 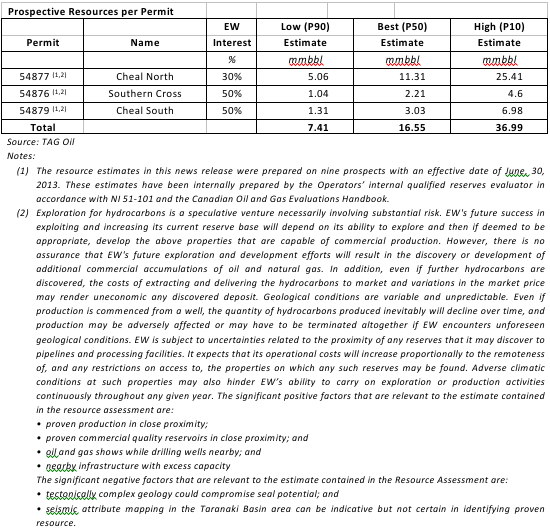 East West Petroleum (www.eastwestpetroleum.ca) is a TSX Venture Exchange listed company which was established in 2010 to invest in international oil & gas opportunities. The Company has built an attractive platform of assets covering and area over 1.6 million acres: Three exploration permits adjacent to existing production in the Taranaki Basin of New Zealand with partner TAG OIL (TSX: TAO); four exploration concessions covering 1,000,000 acres in the prolific Pannonian Basin of western Romania with a subsidiary of Russia’s GazpromNeft; a joint venture exploration program covering 8,000 gross acres in the San Joaquin Basin of California; an oil-prone exploration block of 100,000 acres in the Assam region of India with the three largest exploration and production Indian firms ONGC, Oil India and GAIL; and a 100% interest in a 500,000 acre exploration block onshore Morocco. The Company is now poised to enter operational phases in Romania, where it will be fully carried by its partner Gazprom-controlled Naftna Industrija Srbije in a seismic and 12-well drilling program now underway and in New Zealand where the Company will be drilling nine wells in 2013. The Company has adequate funds to cover all anticipated seismic and exploratory drilling operations through 2013.