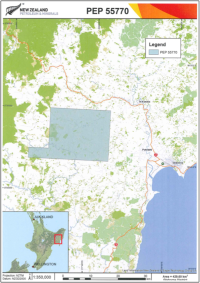 The initial 12-month work program will be funded by the Company and consists of reprocessing available seismic data. Going forward, in order to maintain the Company’s 40% interest in the permit, the Company can choose to fund the acquisition of 60 km’s of new 2D seismic and one unconventional well drilled to approximately 2,500 meters by April 2017.

David Sidoo, President and CEO of East West Petroleum commented, “We are very happy and excited for TAG and East West to be awarded this new acreage in the 2013 New Zealand Block Offer. This expansion into the East Coast Basin with a proven operator like TAG will provide East West with high impact exploration potential in New Zealand. We are also pleased to continue to grow our relationship with TAG, a company that has proven to be very successful over many years with their New Zealand asset portfolio.”

The Company has been informed by TAG that the Cheal-E4 well located in the Cheal North permit (PEP 54877) has reached a total depth of 2,235 meters, and that operations were completed on time and on budget. The Cheal-E5 well was immediately spudded by the Nova-1 drilling rig with the expectation of reaching total depth by mid-December.

In addition TAG has informed the Company that the Cheal-E1 well is expected to be placed back on production on December 9, 2013 after being temporarily shut-in for planned pressure and temperature analysis and that similar testing operations on Cheal-E2 through to Cheal-E5 will continue over the next two months with all successful wells expected to be placed on production throughout December and January. Initial oil produced during the Cheal-E1 test has been delivered to New Plymouth for subsequent sale and eventual export.

East West Petroleum (www.eastwestpetroleum.ca) is a TSX Venture Exchange listed company established in 2010 to invest in international oil & gas opportunities. East West has built a diverse platform of attractive exploration assets covering an area over 1.6 million acres. In New Zealand, East West holds an interest in three exploration permits near to existing commercial production in the Taranaki Basin with a nine well drilling campaign, operated by TAG Oil Ltd. (TSX: TAO), is in progress. The Company also interests in four exploration concessions covering 1,000,000 acres in the prolific Pannonian Basin of western Romania with a subsidiary of Russia’s GazpromNeft; a joint venture exploration program covering 8,000 gross acres in the San Joaquin Basin of California; an oil-prone exploration block of 100,000 acres in the Assam region of India with the three largest exploration and production Indian firms ONGC, Oil India and GAIL; and a 100% interest in a 500,000 acre exploration block onshore Morocco. The Company is now poised to enter operational phases in Romania, where it will be fully carried by its partner Gazprom-controlled Naftna Industrija Srbije in a seismic and 12-well drilling program now underway. The Company has adequate funds to cover all anticipated seismic and exploratory drilling operations through 2013.