Vancouver, British Columbia: February 6, 2013. East West Petroleum Corp. (TSX-V: EW) (the “Company” or “East West”) today announced that it has completed initial production testing at its Pass Exploration 77-20 well located on the Tejon Extension prospect in the San Joaquin Basin, California (East West 25% interest). The well is being operated by the Company’s partner, North American Oil & Gas Corporation (“NAMG”), which has a 75% interest in the prospect.

The well was drilled to a total depth of 7,550 feet, a full suite of electric logs were run after setting a 5 1/2 inch casing.

NAMG continues to test zones of interest in the well and has perforated a 60-foot interval in the Olcese sand and had an immediate blow of gas. The well was shut in for pressure build up and swabbing operations commenced the next day. The swabbing results indicated some light oil, a fluid emulsion, and water. The operator continues to test the well to get measured rates of oil production.

Mr. Barry Chovanetz, VP Exploration and a qualified person, has reviewed the technical disclosure in this news release. 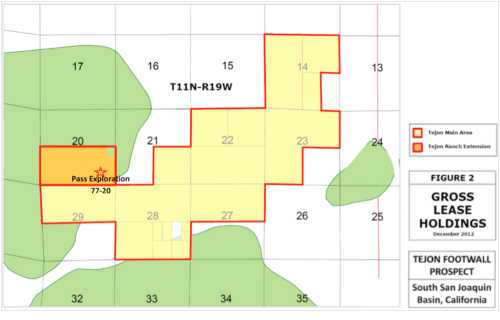 East West Petroleum (http://www.eastwestpetroleum.ca) is a TSX Venture Exchange listed company which was established in 2010 to invest in emerging unconventional resource plays, leveraging management's knowledge of international opportunities and unconventional play technical expertise. In its first 18 months of operations, the Company has built an attractive platform of assets of over 1.6 million Acres. : An oil-prone, exploration block, of 100,000 acres in the Assam region of India with the three largest exploration and production Indian firms ONGC, Oil India and GAIL; four exploration concessions covering 1,000,000 acres in the prolific Pannonian Basin of western Romania with a subsidiary of Russia’s GazpromNeft; a 100% interest in a 500,000 acre exploration block onshore Morocco with conventional and unconventional potential, three exploration permits in New Zealand with partner TAG OIL( TAO :TSX) and a joint venture exploration program covering 5000 gross acres in California. The Company is now poised to enter operational phases in Romania, where it will be fully carried by its partner Gazprom-controlled Naftna Industrija Srbije in a seismic and 12-well drilling program expected to commence in 2013. The Company expects to commence drilling operations in New Zealand with up to 10 wells to be drilled in early 2013. The Company is well funded to cover all anticipated seismic and drilling operations through 2013.